Antique Books and Why I Love Them

I am in love with old books.

Whenever I go to a good used book shop it's basically impossible to get me to leave until I have found and purchased at least two books published before 1920 (though sometimes I make exceptions to that date, though, for example this book was published in 1927 and it's BEAUTIFUL. Look at that cover!) 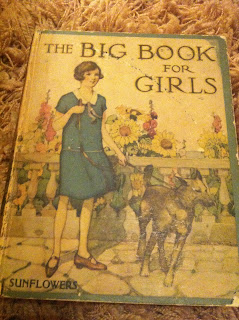 This is my entire collection as of now, and I expect it will get bigger over time: 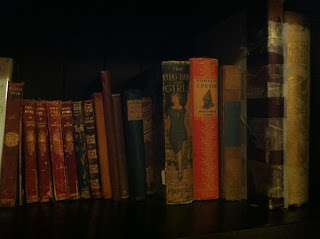 There's something beautiful about old books. It's not just the stories in them that make them wonderful, although the stories are great too. It's the fact that these books have traveled, been given as gifts, done things you've never done, been places you've never been. They've survived wars and revolutions and somehow, despite everything, persevered until they found their way into my hands. There's a real poetry in that, I think.

One of the things I love best about them is the notes from the books' previous owners that you find in the front of some of them. I have a math book from 1877 that, according to the writing in the front, was printed in Baltimore, made its way to San Francisco in 1889 and in 1969 was in Spain--and when I found it, it was in a bookstore in Iowa City! There's a story behind that, I know it, and I always end up wondering what that story is.

I have to say my favorite book in my possession, though, is a huge book of Grimm's Fairy Tales from 1909. It's illustrated by Arthur Rackham(look him up), and there's a note in the front that says (as far as I can read the handwriting)

This book was given to me by a very old and dear friend who took care of me as a baby. It was printed in London and she and her entire family was originally from England, and so I can be fairly certain this book made its way through the thick of both World Wars. It's huge, with cut pages and thick paper and writing in gold on the front: 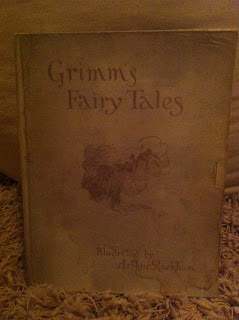 It's an absolute treasure. In addition to the cover, it's got brilliant illustrations inside, both color and black and white. I've spent more than one afternoon just sitting down and reading through it (fairly gingerly.) 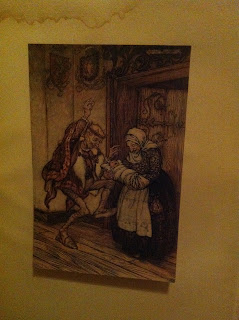 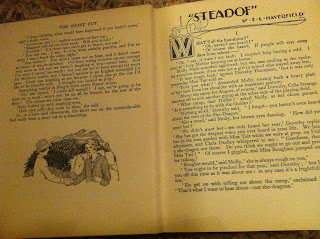 I want to know all about the books I own, where they came from and all the places they've been--but at the same time, I relish their mystery. It's delightful, wondering how these books have made it from then to now. You can imagine all sorts of pasts for them, mad adventures and epic romances. You wonder if this has ever been anyone's favorite book, if they've packed it away and moved to an entirely new place with it, if, perhaps, it's passed through the hands of some famous character in history. I want to keep collecting and collecting. There are specific books I want to find a first edition of (that's not obscenely expensive) and specific bookstores in strange places that I want to go back to in order to find more treasures. And maybe I will someday!

Old books are beautiful, and they hold secrets and adventure, both in the words and the physical pages themselves. If you ever want to make me really happy, get me a nice old book. I will love you forever.
Posted by Katherine Ewell at 3:45 PM